The Importance of Working-Up Abortion Cases

The goal of an abortion work-up is to determine the cause, so that control and/or prevention strategies can be started in the herd/flock:

It is important to keep the fetus AND placenta for veterinary review/sampling in any abortion case. Make sure the placenta and fetus are as clean as possible and keep somewhere cool (refrigerate) and protected until your veterinarian arrives.

As many of the infectious agents causing small ruminant abortions are zoonotic (disease can be transmitted from animals to humans), the following precautions should be considered to reduce the risk of contracting a serious disease:

The Use of Antibiotics to Control Infectious Abortions

As antimicrobial use comes under greater scrutiny, there is a need to examine the evidence for the blanket use of antimicrobials during or after an abortion storm. Diagnostic identification of the infectious cause is critical to successful treatment and control. As we know, diagnosis can often take 72-96 hours to determine, therefore it can be a challenge for veterinarians and producers to not administer medications during that time period.

Within herds and flocks, Chlamydia abortus infection will continue to circulate from year to year due to the continued ability of infected animals to shed the bacteria in subsequent pregnancies. Antibiotic therapy will not eliminate the infection from herds that have had previous outbreaks but will help lessen further abortions from occurring in the middle of an abortion storm. To be effective, antibiotic therapy would need to be given to pregnant females having contact with the aborting dams, at around 95 days of gestation.

Campylobacter has a short incubation period and readily infects pen-mates of aborted ewes during an abortion storm. The two species of Campylobacter bacteria that cause abortions, differ in their response to antibiotics. Campylobacter fetus is generally susceptible to tetracycline. Campylobacter jejuni isolates are routinely resistant to this class of antibiotics. Coxiella burnetii is another abortion-causing bacteria sensitive to tetracycline. Treatment often reduces the overall levels of abortion in the midst of an outbreak, however antibiotics do not reduce the level or duration of bacterial shedding(1).

It is important to remember that since Toxoplasma gondii is a parasite, abortions will not respond to antibiotics but may be controlled using high doses of decoquinate.

Traditionally, chlortetracycline medications have been added to feed in the last 30-40 days of gestation in flocks that experience abortion storms. Evidence demonstrates this is unlikely to be an effective method of administration. Research has shown that chlortetracycline fails to reach detectable limits in the placenta, amniotic fluid and fetal stomach contents in ewes fed 500mg/head/day chlortetracycline(2).

Injectable long-acting tetracycline may be a better choice. There is evidence that it reaches reasonable serum concentrations for 24 hours, but not 72 hours after a single injection(3). The question remains whether repeated dosing is necessary to eliminate or prevent infection of the placenta. Timing of treatment in relation to infection and damage to the placenta is a challenge.

KEY TAKE-AWAY: During an abortion storm, it is important to identify the cause of the abortion problem in order to treat correctly and effectively so as to minimize losses, but also crucial to using antibiotics in a prudent manner.

“Coxevac” manufactured by CEVA. Although not licensed in Canada, the vaccine is available from CEVA after applying for a permit from the Canadian Centre for Veterinary Biologics (CFIA). Administer subcutaneously in the neck region 6 and 3 weeks prior to breeding. Meat withdrawal 60 days.

Initial Problem: A southwestern Ontario goat dairy farm, milking approximately 600 does, reported a small abortion outbreak of 3 does in mid-to-late gestation, along side a history of having treated 10 does showing symptoms of listeriosis over the course of one week. One of these does was euthanized due to a poor response to treatment, and her carcass was submitted for postmortem examination. The diet consisted of baylage and a free choice dairy goat pellet. The owners stopped feeding baylage at the onset of the outbreak, on suspicion it was the source of the suspected listeriosis problem.

A total of 21 mature does had become ill within one week of the initial specimen submissions, with 50% dying or euthanized. Approximately 86% of does affected were in their first lactation. Some does exhibited head tilts and circling, but most maintained appetite but experienced a drop in milk production, while exhibiting some dullness, and drooling. Some does progressed to become extremely dull and off-feed, while others rapidly progressed to being down, paddling, and death.

Lab testing and next steps taken: Specimens from abortions occurring in mid-December, along with the carcass of one mature doe were submitted to the AHL. Testing revealed the abortions and mature doe illness were due to Listeria monocytogenes. Specimens from two more abortions and five more deceased mature does were submitted for testing over the three days following initial lab submissions. Listeria monocytogenes was isolated from all specimens.

Outbreak source and resolution: Approximately one week into the outbreak investigation, does that had not been fed baylage were diagnosed with Listeriosis. Investigation into the source of the outbreak turned to the bedding, as it was discovered poor quality hay was being used as bedding for approximately 10 days prior to the first cases identified by the owners. Bedding samples were submitted to the AHL. Listeria monocytogenes was cultured from all bedding (poor quality hay) samples submitted. The farm purchased straw for bedding and discontinued the use of the poor quality hay. The owners reported 20 more cases in mature does over the next 10-14 days. The incidence of new listeriosis cases decreased over the following 1-2 weeks (20 does became ill and 10 does died), followed by a single case of abortion occurring at the end of January 2019.

KEY TAKE-AWAY: Bedding can be a source of a listeriosis outbreak. It becomes particularly risky when using novel substrates, such as hay, that may be particularly interesting to goats, promoting ingestion. Because infected goats shed large amounts of listeria in their feces, the problem becomes compounded as they continue to browse and ingest bedding material. 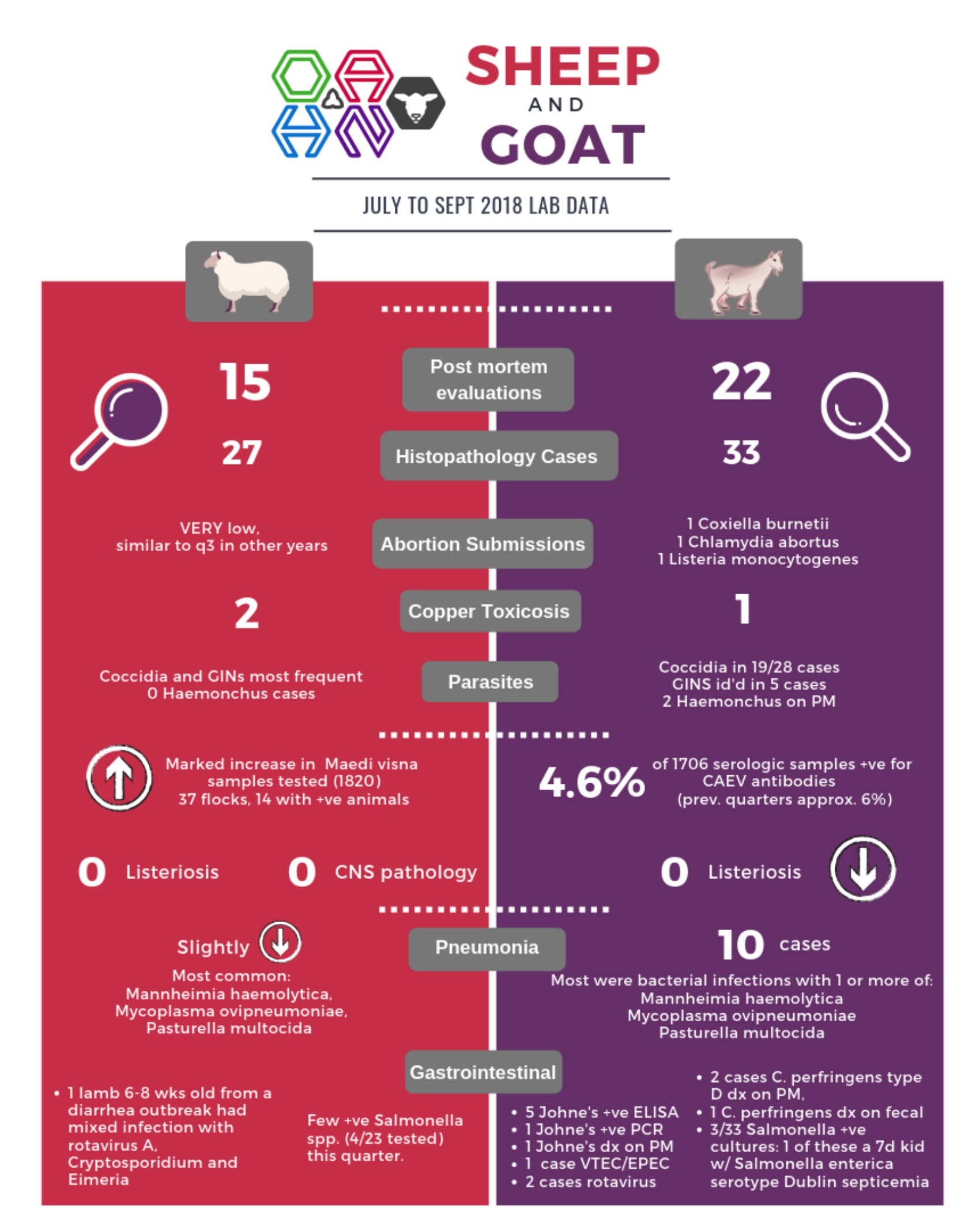 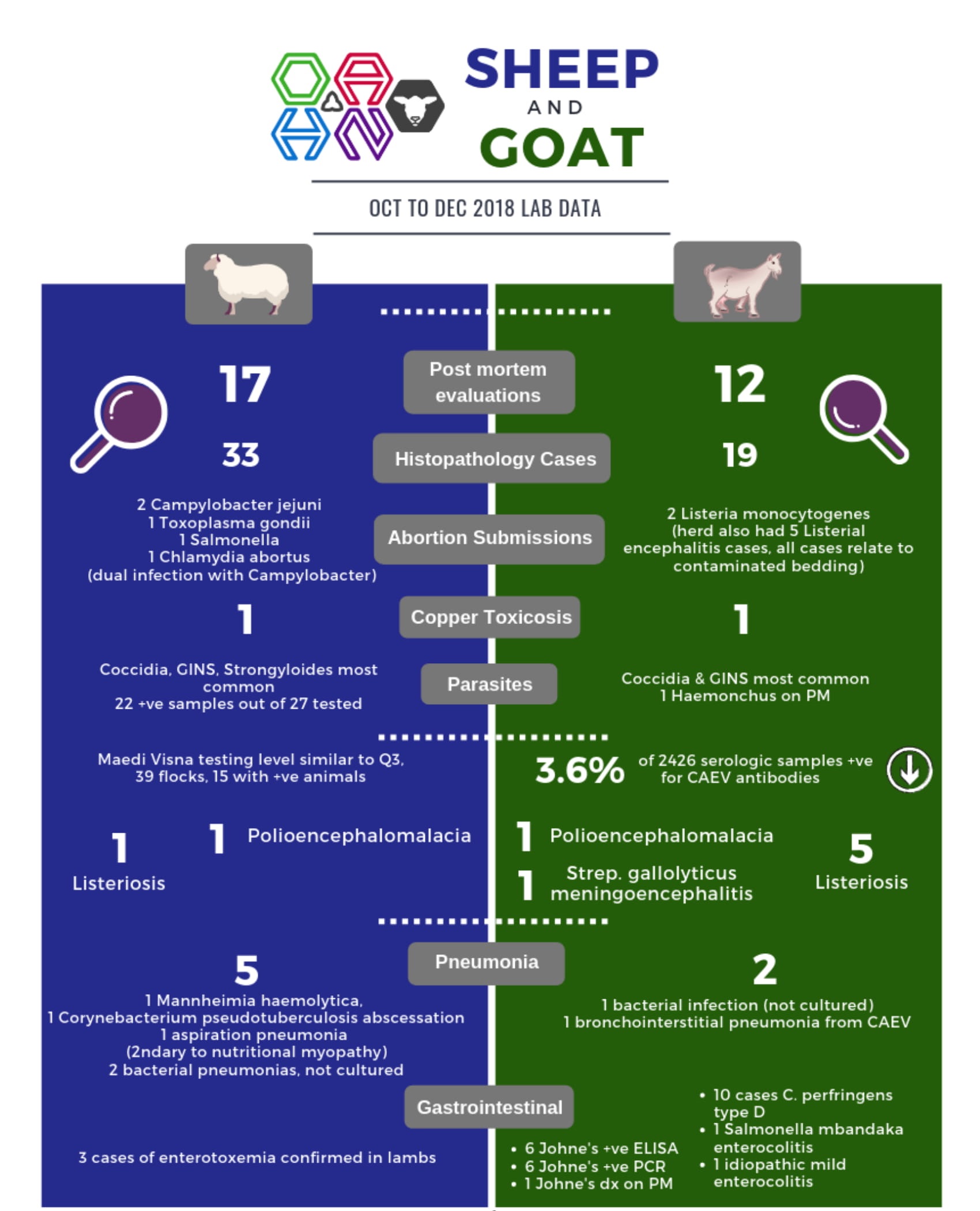