Reovirus – Summary of Genotypes by Year for Ontario 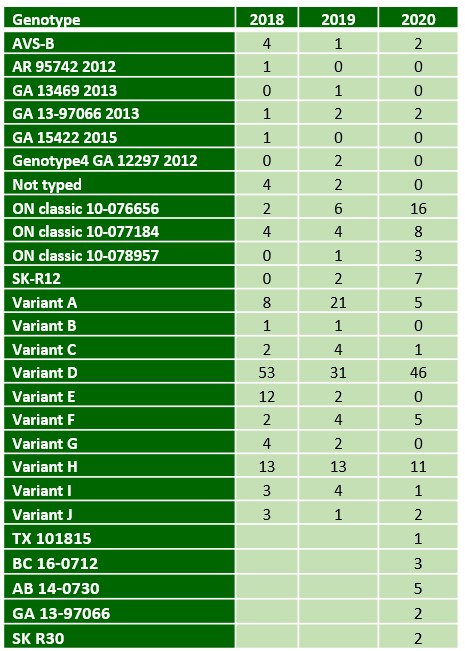 We are changing or reporting schedule!

To more accurately reflect seasonal changes in disease we are moving our quarterly reports to follow the meteorological season. Look for our next report in April 2021.

The new HPAI variant, H5N8 has been sweeping across Western Siberia and Europe causing the death of over 6 million birds. Please work with your producers to review the key biosecurity measures to help with reducing the risk of infection in their flock as outlined at http://www.omafra.gov.on.ca/english/food/inspection/ahw/influenzacommercial.html.

The AHL also reported seeing many suspicious cases on histopathology only. Escherichia coli and Staphylococcus aureus continue to be identified as causes of bacterial lameness this quarter with most practitioners reporting stable to increased prevalence.

The number of cases of nutritional and developmental lameness was stable this quarter with tibial dyschondroplasia (TD) and rickets being noted. The increase in TD diagnosis may be due to more bone samples being submitted to AHL for histologic evaluation in lameness cases.

AHL reported a significant increase in bacterial osteomyelitis and tenosynovitis this quarter namely due to E.coli, E. cecorum, or both.

Coccidiosis and necrotic enteritis cases were reported as stable to increased by practising veterinarians. The AHL also reported stable coccidiosis cases (compared to Q1 and Q2) identifying mainly cases of mixed small intestinal and cecal coccidial burdens, and fewer submissions with only cecal coccidiosis. One case was suspicious for E. necatrix.  Practitioners reported cases due to E. tenella and E. maxima.

Inclusion body hepatitis (IBH) cases were reported to be increased this quarter by both the practitioners and AHL. Genotyping on confirmed cases identified FAdV11, FAdVE, and both FAdVD and FAdVAC strains.

The number of flocks with infectious bronchitis virus (IBV) were reported as stable to increased this quarter by the poultry practitioners. The DMV strain is most commonly identified.

Submissions to the AHL of suspected runting and stunting   syndrome caused by astrovirus were decreased this quarter.  Many submissions were suspect cases since the compatible   lesions were not identified on histopathology.

Proventricular and ventricular (gizzard) submissions   received by AHL this quarter were fewer as were cases of dilated proventriculi seen on farm by practising veterinarians. Cases still appeared at processing.

Condemnation issues were stable to increased this quarter and included localized cellulitis and air sacculitis.

Early systemic bacterial infections (<14 days) with and without associated yolk sacculitis were reported as stable this quarter by practitioners but increased by AHL. Escherichia coli continues to be the most commonly identified bacterial pathogen with a few cases of E.coli isolated with other pathogens including  E. cecorum, and P. aeruginosa.

Starve outs and intussusceptions were reported by the AHL as other causes of mortality.

Prelay morbidity/mortality due to septicemia from E.coli, S. aureus, G. anatis, Pseudomonas spp, or a combination of these bacteria was reported by AHL.

Lameness was stable to increased this quarter.

IBV infections were stable in Q4. Cystic oviducts are still being identified and the DMV strain continues to be identified.

Subclinical rickets was diagnosed by a practitioner but there were no flock level clinical signs.

Five cases of white chick syndrome were diagnosed by AHL and two cases were reported by practitioners.

One case of blackhead was reported by AHL.

Bacterial peritonitis/salpingitis due to E. coli was stable.

One case of osteomyelitis /tenosynovitis /arthritis due to bacterial septicemia was reported by AHL.

Focal duodenal necrosis (FDN) was reported by one practitioner this quarter but is otherwise considered stable to slightly increased within the industry. AHL also reported a couple of cases of FDN diagnosed histologically.

A case of false layer syndrome, the first to be confirmed in the past few years, was reported by a practitioner. The flock achieved 93% production so it was considered a mild case.

There were a couple of suspect cases of IBV where there appeared to be oviductal hypoplasia (gross and histologic diagnosis). This was also reported by the practitioners. Two cases of reduced egg production/quality were IBV PCR positive and the DMV strain was identified on genotyping.

One case of histomoniasis in a layer flock was diagnosed by AHL.

Two cases of necrotic enteritis and four cases of coccidiosis were reported by AHL and one case of E. brunneti coccidiosis by a practitioner.

Other causes of early mortality < 14d were stable this quarter.

Necrotic enteritis and coccidiosis were reported as stable to increased by   practitioners.  AHL reported a case of cecal coccidiosis.

A case of rickets was reported by AHL.

Enteritis was reported as stable to increased this quarter by practitioners

Two cases of blackhead were reported this quarter by practitioners and, in one case, about forty percent were condemned for liver lesions. Practitioners could not obtain the parvomycin for treatment of blackhead as the Canadian allotment went to Western Canada where there has been a dramatic increase in blackhead cases.

Veterinarians reported tenosynovitis due to reovirus was stable to increased this quarter. One practitioner reported that cases of aortic ruptures due to reovirus seem to be decreased. Pericarditis lesions were seem in 21 day old birds that looked like reovirus lesions (lymphoid infiltrates) in chickens . These birds also had tenosynovitis at 10-11 days. One reovirus case genotyped at AHL identified the Pennsylvania strain.

Marek’s disease continues to be the most common diagnosis

A number of flocks continue to have external and internal parasitism diagnosed including lice, coccidiosis, Ascaridia, Heterakis and Capillaria. Intestinal parasitism predisposes these birds to development of necrotic enteritis.

Three cases of ILT were diagnosed by AHL . On genotyping, one case was a vaccine strain, one was PCR positive but not Typed, and one isolate was indistinguishable from the vaccine virus.

Intussusceptions were diagnosed in two birds (3 and 5 months of age). No etiology could be identified.

Poultry Health Research Network information, events, and lectures can be accessed on the PHRN website: https://phrn.net/ or on the PHRN YouTube channel: https://www.youtube.com/user/PoultryHRN