Wild bird migration and the movement of Avian Influenza Virus

Emily Martin, Avian Pathologist, Animal Health Laboratory, University of Guelph Jane Parmley, Associate Professor, Department of Population Medicine, University of Guelph Avian Influenza (AI) is caused by type A influenza virus (family Orthomyxiviridae, genus Influenzavirus A) classified into subtypes by 2 surface proteins: hemagglutinin (H1-H16) and neuraminidase (N1-N9). As an RNA virus, errors are made during replication that cause the virus to change and evolve. Sometimes these errors are minor but other times larger pieces of genetic material can be traded with another AIV virus, increasing the risk of the virus becoming highly pathogenic (causing severe disease in poultry) or able to infect mammals (i.e. swine, humans). 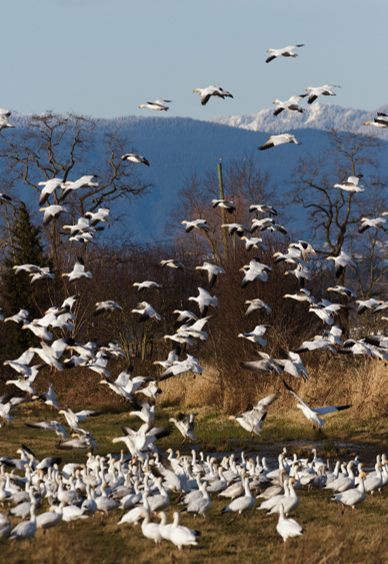 Avian Influenza Viruses (AIV) can be grouped as low-pathogenic (LPAIV) or highly-pathogenic (HPAIV, H5 and H7 subtypes). In countries such as Canada where HPAIVs are not endemic and are considered a Foreign Animal Disease (FAD), flocks are destroyed when HPAIV is identified to prevent further spread of the virus. The low pathogenic subtypes of H5 and H7 are handled in the same manner as HPAIV as these subtypes can transform into HPAI as the disease spreads through the flock(s). In order to manage the risk of poultry flocks, or swine and humans, contracting this virus, potential risk factors must be considered. One of these risk factors includes wild birds. AIV naturally infects wild birds and most wild bird species do not show symptoms of infection. All known subtypes of AIV have been isolated from wild birds and LPAIVs are most common. The virus is carried and replicates in the intestinal and respiratory tracts, spreading via feces, saliva, and nasal secretions. Domestic poultry are highly susceptible to AIVs. If flocks are infected with LPAIV the birds may have mild symptoms but the virus is more likely to transform to HPAIV. If a flock is infected with a HPAIV then the birds tend to have severe symptoms and high mortality. This has significant impacts including economic loss, international trade sanctions, and potential spread to humans and other livestock.   Since wild birds can carry AIV without symptoms, they can potentially pass AIV to other wild birds, including during migration. There are 8 migratory pathways worldwide and many of these overlap (Figure 1). This creates the potential for AIV to emerge and evolve as well as to move long distances when spread to other migratory or non-migratory birds, including poultry. Previous research tracking H5N1 HPAI between migratory bird flyways identified a correlation between wild bird migration and H5N1 HPAI infections in people. This suggests that transmission is strongly associated with avian migration. Most wild bird samples are collected during the fall and spring migrations with identification of AIVs being more likely during the fall migration and at higher latitudes. It is thought this pattern of identification occurs due to the larger number of naïve, juvenile birds in the population during the fall migration. As the juveniles fly south, they become infected, recover, and are less likely to be carrying the virus once they reach lower latitudes. Wild birds are tested annually in Canada.

There are certain migratory birds, predominantly ducks, followed by geese and gulls that are mainly responsible for annual movement and evolution of AIV. The virus is stable and can survive in the environment for weeks to months. One study showed that AIV in duck feces remained infective for at least 30 days at 4 °C and for 7 days at 20 °C. The aquatic environment is also a potential source of infection for other birds or mammals. While research has provided a better understanding of how AIVs move over long distances (i.e. migration pathways) it is still not well understood how AIVs move from wild birds into poultry populations (i.e. closed poultry barns). To track the movement of AIVs, the strains are compared by looking at their genetic structure in comparison with other isolates. There is a world influenza database (GISAID – Global Initiative on Sharing Avian Influenza Data) where the genetic sequences of AIVs can be uploaded and compared to other AIVs. This can be used to compare AIVs from the same and different geographic areas, look for mutations, and determine if there is movement into bird or mammalian populations (i.e. swine or humans). Part of this comparison consists of constructing a phylogenetic (family) tree of the viruses to see how they cluster into groups; viruses that are more closely related will cluster closer together. As more information is gathered, we can have a clearer picture of how AIVs move within and between species of birds and mammals and how the viruses change over time. It should be noted that when humans become infected with Influenza A (the same group of viruses as AIV), virus mutations or recombinations can occur and birds or swine can then be infected with the virus from humans (and vice versa). That is why poultry workers are encouraged to have a ‘flu shot’ every year to protect themselves and their flocks. Please be aware that there is an ongoing HPAI epidemic in Europe. For more information, please refer to the following links: https://www.efsa.europa.eu/en/efsajournal/pub/9979 https://www.thepoultrysite.com/subject/health-disease/diseases/avian-influenza-bird-flu https://wahis.oie.int/#/events

It should also be remembered that not only AIVs can be transmitted by wild birds. Cormorants play an important role in the maintenance and circulation of Newcastle Disease Virus (Avian Paramyxovirus-1) in North America, also designated a Foreign Animal Disease in Canada. NDV was detected in Cormorants in Ontario in 2021. You can read about previous cases (2018) here: http://blog.healthywildlife.ca/avian-paramyxovirus-newcastle-disease-outbreak-in-double-crested-cormorants-in-ontario-and-the-maritimes/

Early systemic bacterial infections (<14 days) were generally stable this quarter as reported by practitioners. Escherichia coli was identified by practitioners.  The AHL reported confirmed cases due to E. coli with or without  E. cecorum, P. aeruginosa or C. perfringens. Other causes of early mortality (<14 days) was reported as stable to decreased. Late systemic bacterial infections (>14 days) were reported as overall stable with some practitioners seeing a decrease and one reporting an increase in cases.  E. coli, Enterococcus cecorum and Clostridium sp were the main bacteria isolated. AHL reported increased numbers of cases attributed to E.coli alone or in various combinations with E. cecorum, S. aureus, S. typhimurium or C. perfringens. AHL reported a decrease in bacterial osteomyelitis and tenosynovitis this quarter that were namely due to E.coli and S. aureus or diagnosed on histopathology. One practitioner noted an increase in Salmonella sp isolation. Isolates listed included group B, D, and S. enteritidis (US source). Reovirus-associated lameness cases were decreased to stable by practitioners. AHL reported an decrease in confirmed cases. A number of different genotypes were detected. In birds <14 days, variants identified included H, K and SK_R38. In birds >14 days, variants included F, A, SK_R38 and Ontario classic 10-076656. Escherichia coli and E. cecorum alone or in combination were identified as the main causes of bacterial lameness this quarter with most practitioners reporting stable to increased prevalence.

Submissions to the AHL of confirmed runting  and stunting syndrome caused by astrovirus  were slightly decreased this quarter. Proventricular and ventricular lesions were reported as stable by AHL. One practitioner reported an increase in proventricular dilation in a flock of guinea fowl fed excessive grit. One practitioner reported a case of salt toxicosis in 3 week old birds. Condemnation issues were  reported as stable by veterinarians this quarter and included cellulitis, woody breast, ascites, air sacculitis, hepatitis and ascites.