Runting Stunting Syndrome (RSS): Why is it so difficult to diagnose?

Since early 2016 there have been chicken broiler flocks identified with clinical signs including low body weights, inability to meet 7-day target weights, small chick size, and poor uniformity (Figure 1). Postmortem findings primarily involve thin-walled, dilated duodenum and jejunum filled with watery content (Figure 2). Pancreatic atrophy may also be detected. Samples sent for further testing in the US identified astrovirus in the affected small intestines leading to the conclusion that this clinical presentation could be defined as Runting Stunting Syndrome (RSS). However, it should be noted that not all flocks showing clinical signs of runting and stunting will have RSS. Chickens are bred to grow extremely fast, therefore, any management factor(s) or early disease could potentially cause a general clinical sign of runting and stunting in a flock. Other rule outs include bacterial infection, inclusion body hepatitis, reovirus, RSS, stress, etc. Diagnosis of RSS in different geographic regions could involve different combinations of viruses and other factors, therefore, diagnosis relies on postmortem lesions and histopathology.

On histopathology, depending on when tissues are collected, lesions may be well developed and clear to diagnose (Figures 3 and 4). However, many times the lesions are either early or late in development, making diagnosis difficult. If the birds are less than 11 days old, this may require resubmission of tissues in 7-10 days to allow the lesions time to develop. PCRs on intestinal content are difficult to interpret because the majority of birds, with and without the clinical signs of runting and stunting, will normally become positive for a number of viruses by the end of grow out. These viruses include reovirus, rotavirus, chicken astrovirus, parvovirus, avian nephritis virus, etc. Since the birds will likely be exposed to and become positive for these viruses, it is impossible to determine if they are involved in development of disease.

The RSS case definition, as defined by the Ontario Industry Broiler Health (IBH) working group has the following main points:

Submissions to the AHL of confirmed runting and stunting syndrome caused by astrovirus were increased this quarter.   If you think your flock has clinical signs consistent with Runting Stunting Syndrome, please contact your veterinarian for assistance.

The new HPAI variant, H5N8 has been sweeping across Western Siberia and Europe causing the death of over 6 million birds. Please work with your producers to review the key biosecurity measures to help with reducing the risk of infection in their flock as outlined at http://www.omafra.gov.on.ca/english/food/inspection/ahw/influenzacommercial.html.

You can hear the wave of panicked birds flow from the back of the barn to the front and back again just before the barn begins to shake. That’s the experience when standing outside a barn housing “hysteric” pullets. Hysteria is not common, with only a few flocks reported yearly, and not much is know about what causes it.  However, there are some common characteristics amongst affected flocks:

Trickle or stray voltage has been identified as an inciting cause in some episodes of hysteria. Electricians have found measurable voltage in the ground outside affected barns. An isolator placed on a barn can reduce the stray voltage but may drive the stray voltage to the next barn. Voltage can also travel through water lines since some of the black PVC  piping contains carbon particles which conduct electricity. The outcome of an episode of hysteria is not insignificant with some flocks experiencing 1-2% mortality. Mortality is secondary to scratches or wasting secondary to crushing .However, in general, there is little overall affect on growth and uniformity. Episodes of hysteria can be blunted with feed treatments such as VEO premium. These are all natural products that can “take the edge off” the panic. If your flock suffers an episode of hysteria, please contact your veterinarian. For more information on dealing with stray voltage, please contact Hydro one. stray voltage (hydroone.com) 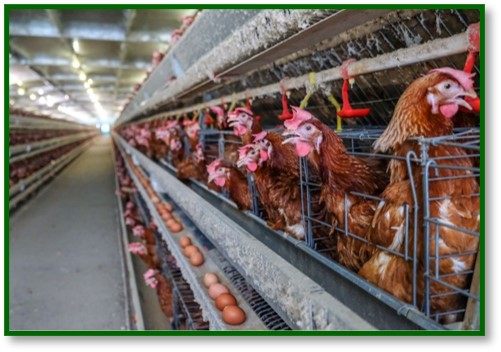 Hysteria was reported as increased by one practitioner this quarter.

Bacterial peritonitis/salpingitis due to E. coli was stable. Early systemic bacterial infections (<14 days) were stable to increased. Osteoporosis responsive to phosphorus supplementation was reported by one practitioner. Focal duodenal necrosis (FDN) was reported as stable by practitioners. One case of IBV due to the DMV strain was reported in pullets showing respiratory signs. ILT was reported as stable to increased. ILT is rare in commercial layers, however, there was an infected flock in the Niagara region this quarter which showed rare to minimal clinical signs. The vaccine strain of ILT was implicated. Necrotic enteritis and coccidiosis cases were reported as stable to decreased by practitioners. One case of necrotic enteritis was secondary to coccidiosis vaccination and another practitioner reported the prevention of coccidiosis secondary to vaccination with amprolium treatment. Hysteria was reported in 10-15 week old pullets. The etiology of this condition is unknown but trickle voltage has been suspected in several cases. Hysteria occurs when the birds reach sexual maturity and does not impact growth rate or uniformity. Administration of calming agents in the feed is useful.

Histomonas meleagridis, the causative agent of Blackhead disease (histomoniasis), is a protozoan parasite with a complex life cycle. Avian species that are susceptible to natural infection with Histomonas include, in order of susceptibility, turkeys, pea fowl, guinea fowl, chicken, chukar, pheasant, and bobwhite quail. Histomonas is a fragile organism and can only last minutes to hours in the environment, therefore, an intermediate host is needed to survive. Direct transmission is thought to be possible only in turkeys, by direct contact or ‘cloacal drinking’. Ducks can also be asymptomatic carriers of Histomonas.

Lesions of histomoniasis are primarily in the ceca. Liver lesions are common in turkeys but not in other birds. Protozoa may also migrate through the bloodstream to other organs (spleen, kidney, pancreas). 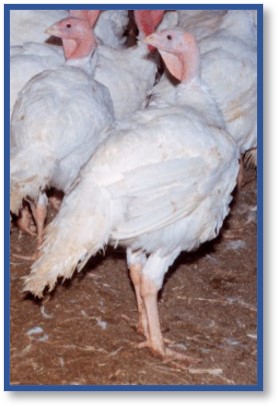 Prevention of histomoniasis is based on three principals:

from birds that are reservoirs of Histomonas

in small turkey flocks’ for a more information and list of

preventative measures to take for this disease: 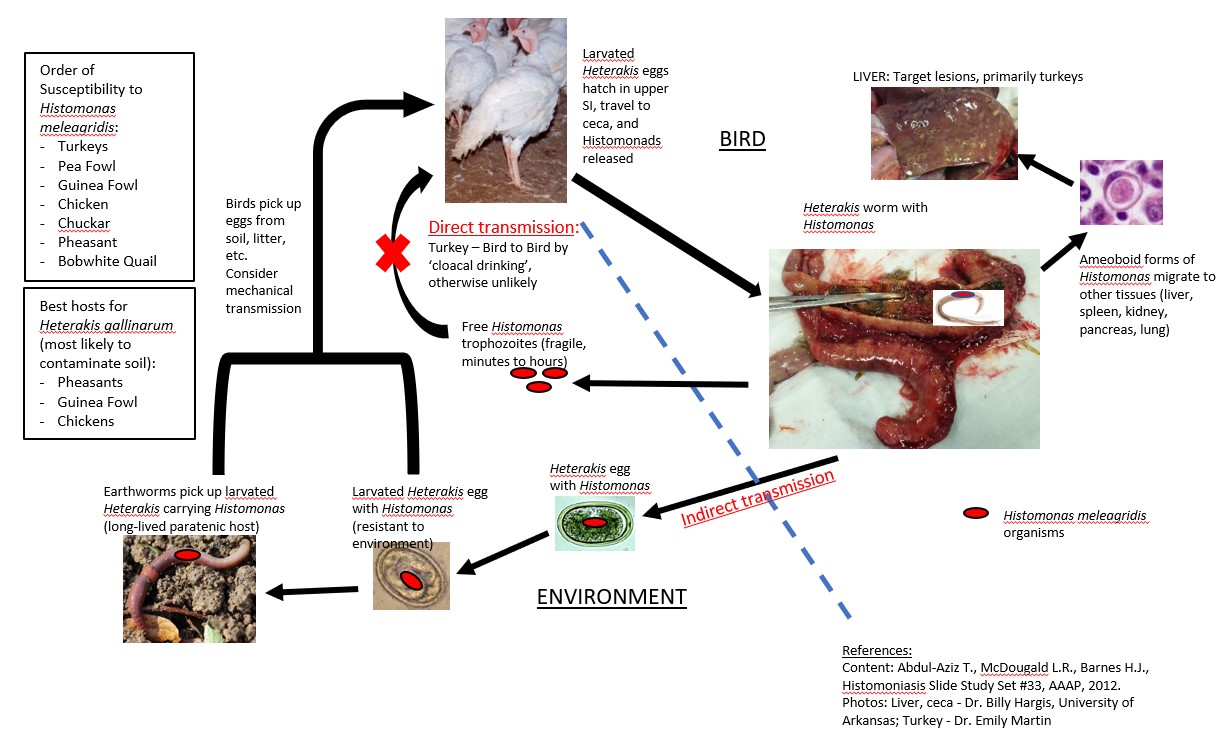 One case of blackhead was reported this quarter by a practitioner in 20 week-old toms.

AHL continues to receive increasing submissions from backyard flocks. The number of backyard/urban poultry has increased due to COVID-19. Marek’s disease continues to be the most common diagnosis. A number of flocks continue to have external and internal parasitism diagnosed including lice, mites, coccidiosis, ascaridia, and cryptosporidia. Intestinal parasitism predisposes these birds to develop necrotic enteritis. Three cases of ILT were diagnosed by AHL. One case of ORT was diagnosed by AHL. Various other diagnoses in chickens included: IBV (3 positive by histology, 1 by PCR) , 3 sinusitis cases (1 due to Avibacterium sp. ), Mycoplasma gallisepticum, fowl pox, intussusception, emaciation and predation. Diagnoses in other species included: Ascaridiasis (pheasant), Mycoplasma gallisepticum (pheasant), emaciation (pheasant), and Marek’s disease (quail).