The following data highlights submissions to the provincial veterinary laboratory in Q2 – May to July 2019.

11 submissions submitted to the Animal Health Lab between May and July in 2019 were positive for Salmonella Dublin. These samples came from an estimated 10 different premises. Sick

Sick calves were between 4 days and 5 months of age. 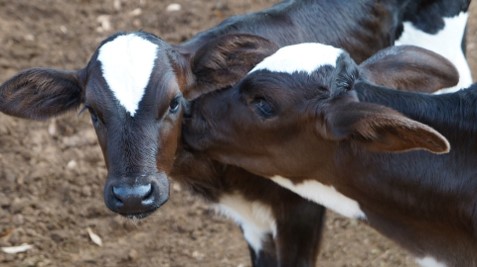 Salmonella Dublin causes fever, pneumonia, and death, sometimes quickly without seeing other signs. Typically cattle under 6 months of age are affected but

It is important to be aware that Salmonella Dublin can also cause illness in humans. If calf caretakers, producers, or their families become ill, contact a physician. mature animals can become ill. Salmonella Dublin samples from Ontario are consistently multi-drug resistant and many farms suffer high mortality in sick calves. Samples submitted to the Animal Health Lab in 2019 have identified Salmonella Dublin from dairy, veal, and beef operations in Ontario. Across commodities, this emphasizes the importance of biosecurity and rigorous management of newly purchased animals before introducing to the herd. calves were between 4 days and 5 months of age.

In August 2019, there was a positive case of bovine anaplasmosis in Ontario. Anaplasmosis is an infectious disease of cattle caused by a bacteria that infects red blood cells, Anaplasama marginale. A. marginale is primarily transmitted by ticks and although several types of ticks that can carry the disease are present in Canada, the disease is rare here. Previous cases have been reported in Ontario in 2013 and 2016. Anaplasmosis is regularly found in many other countries including parts of the United States. The greatest risk factor for introducing this disease is the purchase of animals.

If purchasing animals from outside of Canada, it is highly recommended to test for Anaplasma marginale before introducing the animal to the herd. Cattle carrying the disease typically do not show any signs of disease but are infected. The disease can easily be spread from carriers to other naïve cattle by ticks, biting flies, or by using needles on more than one animal. It can also be spread from an infected dam to an unborn calf.

Anaplasmosis infects red blood cells and causes severe anemia. Infected cattle develop a fever, weakness, heavy breathing, and dramatically reduced milk production. Cattle over two years of age typically have more severe disease and a higher risk of death whereas young cattle may show few signs. Regardless of severity, all cattle that recover become carriers of the disease. Anaplasmosis can be confirmed using a blood test. It is recommended to consult with your veterinarian if you suspect infection or are purchasing animals. 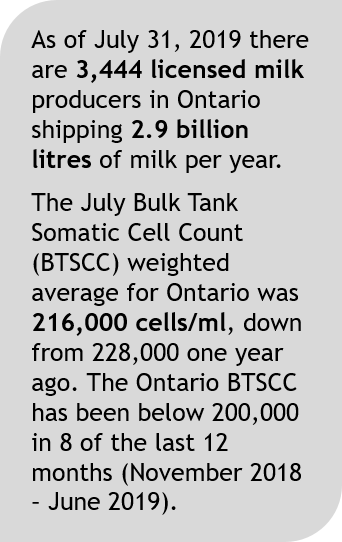 As of July, 2019 41% of dairy herds are enrolled in Ketosis testing using test day milk samples.

Three 12-15 month-old Holstein heifers were found dead overnight in 2 adjacent pens in a freestall barn. A recent feed change to sorghum silage had occurred one week ago, and 60 heifers were being fed the silage as the main source of roughage along with a small amount of corn and access to a protein lick tank. Feed intake was considered normal. No clinical signs were observed the previous evening. The animals were found dead in lateral recumbency in the morning.

One heifer was sent to the AHL for postmortem examination. The animal was in good body condition, oral mucous membranes were slightly pale, and ocular mucous membranes were slightly dusky. No significant gross abnormalities were found on postmortem examination. The rumen was full of silage, with a small gas cap, and rumen pH was 6.5-7.0. Based on the history of multiple animals affected following a recent feed change to sorghum silage, the silage was removed and replaced with corn silage. A silage sample, as well as postmortem ocular fluid from the heifer, was submitted to the AHL Toxicology laboratory for nitrate analysis.

The sorghum silage nitrate analysis was 40,000 mg/kg dry weight (40,000 ppm or 4%). In general, feed with <5,000 ppm nitrate is considered safe to feed under all conditions, 5,000-9,999 ppm is considered safe for non-pregnant animals but should be limited to 50% of the ration for bred cows, 10,000-17,000 ppm should be limited to 35-40% of the total dry matter in the ration and should not be fed to pregnant animals; feeds >17,000 ppm nitrate are considered to be toxic and should not be fed to cattle.1 Ocular fluid nitrate analysis was 52 mg/l. Nitrate values in excess of 10 ppm are suspicious for, and in excess of 20 ppm are considered indicative of toxicity2.

Fast-growing forage crops such as sorghum may accumulate toxic levels of nitrates under stressful growing conditions, for example periods of dry weather followed by a rain, or after heavy applications of nitrogen fertilizers. Although ensiling can reduce nitrate levels by 25-65%, the crop must be at the correct moisture level for proper fermentation to occur. Baleage is generally too dry to ferment completely, and nitrate levels are stable in dry hay.3

Nitrates in forage are reduced to nitrite in the rumen, then quickly converted by rumen bacteria to ammonia, which is absorbed and excreted into urine. High levels of nitrate ingestion and subsequent nitrite production overwhelm conversion to ammonia, and nitrite is absorbed directly, oxidizing hemoglobin to methemoglobin (MHb) which is incapable of oxygen transport. Clinical signs of hypoxia can be subtle, and include increased respiratory rate, apprehension, weakness, depression and recumbency. Pregnant animals may abort. If MHb reaches 75-80%, animals begin to die. If the accumulation is not lethal, MHb is slowly reduced back to Hb over a 12-24 hour period. At autopsy, few distinctive lesions are evident. Blood and tissues may be dark or “chocolate brown” colored, but this is not a consistent feature. Forage testing of composite samples is the only method to evaluate risk for nitrate toxicosis, prior to feeding.   AHL