The following data highlights submissions to the provincial veterinary laboratory in Q3 – August to October 2021.

This quarter, the OAHN bovine network reviewed all MAP testing conducted in Ontario to summarize results over the last year. A testing window of October 1, 2020 to September 30, 2021 was examined and data were provided courtesy of the Animal Health Laboratory and Lactanet.

The AHL provides the ELISA test on serum or milk and the PCR and culture test on feces. A total of 3,832 individual tests were performed. The test results are summarized in Table 1.

Where history was provided for ELISA submissions, the test was used for routine herd screening (n=1669), for a new purchase or when requested by a buyer (n=181), as follow-up testing after other positive(s) in a herd (n=435), and as a diagnostic test for animals with clinical signs consistent with Johne’s (n=147).

Where history was provided for PCR submissions, the test was used for routine herd screening (n=171), for a new purchase or when requested by a buyer (n=5), for follow up testing after other positive(s) in a herd (n=12), and as a diagnostic test for animals with clinical signs consistent with Johne’s (n=32).

Lactanet provides the ELISA test on milk. A total of 5,586 tests were performed.  The test results are summarized in Table 2.

There were 128 herds in Ontario that tested one or more cows during the time period via Lactanet (89 Holstein, 36 Jersey, 1 Guernsey, 2 Mixed). Of these herds, 21 herds tested more than 90% of their cattle. A total of 52 herds tested 50% or more of their animals during the one-year period. 23 of these 52 herds had all negative tests. Among the 29 herds with positive tests, the average positive prevalence was 4% (range 1-32%).

Thank you to Jim Fairles and David Kelton for their time extracting data for this article and to the Animal Health Laboratory and Lactanet for sharing testing results for the benefit of veterinarians and producers.

Scenic Holsteins in St. Mary’s Ontario has prioritized disease testing and management in their herd of 250 milking cows. Over the last decade, they have committed to a monitoring program for Mycobacterium avium paratuberculosis (MAP, also called Johne’s Disease) and bovine leukemia virus (BLV).

Herd vet Mac Littlejohn (Kirkton Veterinary Clinic) and Scenic Holsteins’ owner Stefan Weber shared their protocol for testing with OAHN. Stefan collects blood samples from cows during their dry period, taking samples approximately every 2 months for the next set of cows. Serum samples are submitted to the Animal Health Laboratory for ELISA testing.

A recent review of the testing program shows impressive results. All samples tested since 2007 were collated, which includes 1,273 test results for MAP and 2,917 test results for BLV. As demonstrated in Figure 1 and Figure 2, through the efforts of testing and management changes, the prevalence of both diseases has decreased over time.

Over time the herd’s testing strategy has evolved. For MAP, when the prevalence was higher, the farm tested all cows beginning when they entered their second lactation. Recently this has been adjusted to test cows as they enter their 4th lactation or higher. In 2021, this resulted in the herd testing 86 animals, or approximately 34% of the herd. For BLV, all springing heifers and any cow with a previous negative test are tested within 8 weeks of calving. 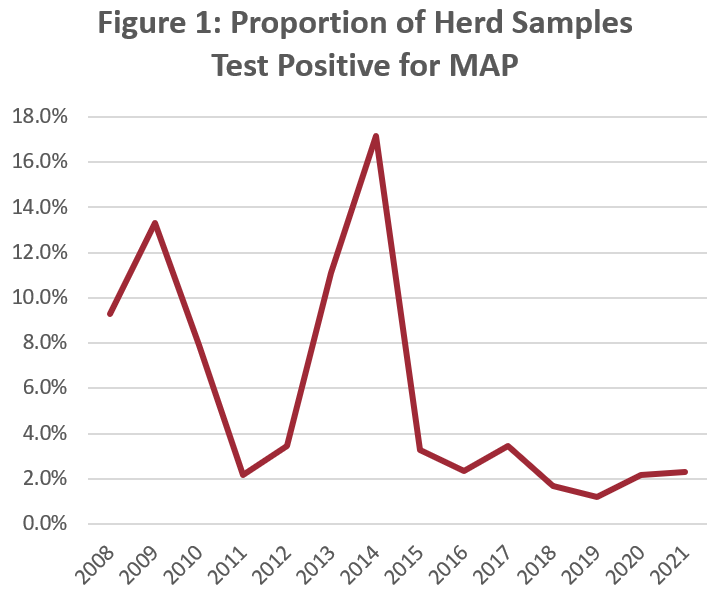 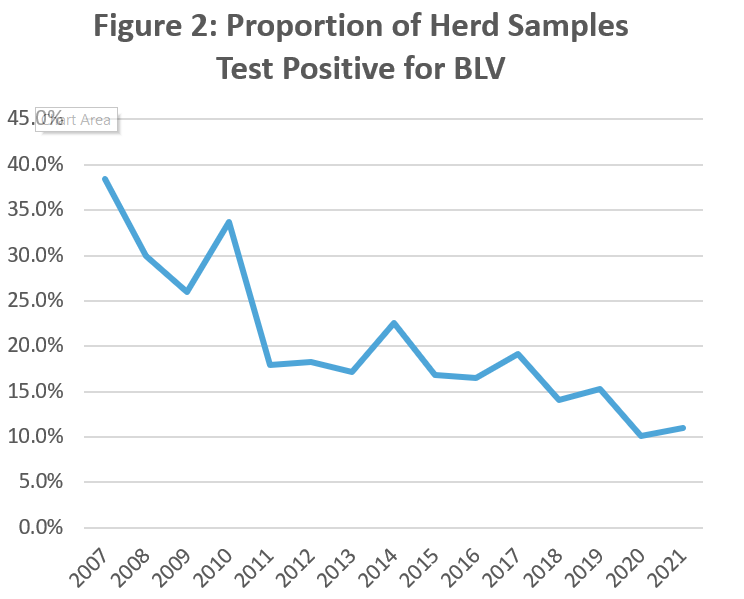 The results from the testing program are used to make management decisions for cows as they calve. Animals with a positive test are immediately labelled in DairyComp. Cows that test positive for MAP calve in a separate area to reduce contamination of the other calving pens. Calving pens are cleaned after any positive MAP cow has calved and these cows are not bred back. The colostrum from known MAP animals is not used for calves and an effort is made to quickly remove these calves from the calving area and provide them with colostrum from a negative cow colostrum bank. Heifer calves from BLV positive cows are also fed negative colostrum.

Other farm management practices are carried out with the goal of reducing the risk of disease transmission in mind. Prior to pregnancy examinations, positive animals are marked with chalk. This allows known positive animals to be examined after all negative status cows. The herd also has a one-time use policy for needles – a new needle is used for each injection on the farm to reduce the risk of transmitting BLV.

Endemic diseases such as MAP and BLV can not be eliminated overnight. Reducing the prevalence in the herd requires a coordinated effort of management changes to reduce transmission and testing to address cattle that are infected or shedding. The diligence and commitment to stay the course is clear from Scenic Holsteins’ results.

The OAHN bovine network gratefully thanks Scenic Holsteins and Dr. Mac Littlejohn for sharing their data and the success of their MAP and BLV control programs.

Veterinarians and producers may be interested in the following webinar opportunity through the Beef Cattle Research Centre.